As soon as the iconic sound of Frankie Valli and the Four Seasons is played across the dancefloor, it is instantly recognisable, even nearly sixty years after the group charmed lovers and listeners across the world.

It is hard to resist singing along to some of their biggest hits. From Can’t take my eyes Off You and Sherry to Big Girls Don’t Cry and the classic December 1963 (Oh, What a Night), you’re sure to know the words to at least one of their tracks.

Their sound is timeless, and the legacy of Frankie Valli and the Four Seasons now not only continues through their music but on the stage too, with the award-winning musical Jersey Boys.

Now starting it’s second UK tour after roaring success, this show has swaggered onto the stage at Southampton’s Mayflower Theatre, ready to transport us back to the sixties; to the heyday of classic rock ‘n’ roll and the giants of the airwaves.

I was delighted to be invited along to review the production after hearing very good things from friends and family who had previously seen the show.

A roaring success and a musical sensation, Frankie Valli and the Four Seasons – and their many previous incarnations – saw incredible success at a time when the charts were a fierce battleground. Facing the titans of the sixties music scene like The Beatles and The Rolling Stones was no mean feat, but their honest, relatable music won hearts across the world; they even became a source of inspiration for that very same musical competition and had such a wide appeal; their place in the Rock & Roll Hall of Fame is well earned.

However, like most bands, they had their ups and their downs. Directed by Des McAnuff, Jersey Boys offers an insight into the story behind the success, not from a film or a book, but from real life.

The show takes us on a journey from the group’s humble beginnings to the heady heights of fame, and back down to earth again. Each of the Four Seasons tells their side of the story through…well…the four seasons of the life of the band.

It’s a clever format; almost like a documentary on stage. This is no fantastical story crafted from the band’s hits, like We Will Rock You or American Idiot, but straight-up storytelling. The simplicity is brilliant. Each band member has his version of events, and they are woven together seamlessly.

The story begins by laying the foundations, introducing characters and, naturally, setting the scene. Admittedly, it takes a while to settle into it the story. It’s not slow, but there is a level of detail that is a little hard to keep up with, and along with those distinct Jersey accents, it’s tricky to understand who’s who and what’s what for a very short period of time.

However, the pace soon picks up, the characters are fleshed out, and the scene is really set for the rest of the show. It is then that the action really starts; the group is formed one member at a time, and they on the road to fame.

Throughout the production, we are met with hit after hit. Each track is seamlessly infused with the narrative, dispersed between dialogue and keeping up the pace.

The music is sensational. Of course, that’s to be expected from a musical about a world-famous band, but the standard is incredibly high. The vocals are spot on and the harmonies are so perfect it’s easy to imagine that you’re watching the real deal.

Those very vocals belong to a brilliant cast. The Four Seasons each stand out with strong personalities as well as voices. Simon Bailey is fantastic as the cocky and unruly Tommy Devito and, as the first of the Seasons to say his bit, he makes for a very strong start.

Michael Watson is impressive as Frankie Valli himself; with vocals that cut through the music and hit the high notes with ease, we watch him become the frontman he was meant to be. Watson plays the role with skill and credibility.

Declan Egan as the once one-hit-wonder Bob Gaudio is charming and rather loveable, but is no soft touch; Egan plays this role extremely well and commands attention with a smile. Lewis Griffiths’s Nick Massi appears to be a man of few words, but when he has his moment he is assertive and surprisingly witty. His bass vocals are as impressive as Frankie’s falsettos.

And it’s not just about the quartet. Each member of the supporting cast are excellent too; the mob, the women, the managers and the rest do not fade behind the scenes but hold their own on stage and complete the whole production. 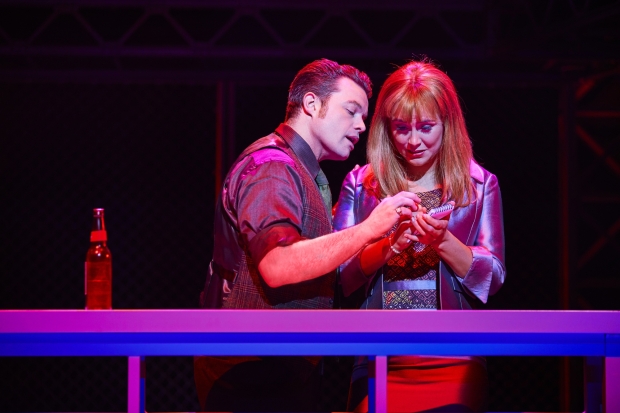 The set (designed by Klara Ziedlerova) is simple and so effective; minimalistic design enables a bar to transform instantly into a cell; a bedroom into a recording studio. The slickness of the production stands out and makes the show a pleasure to watch. There are no jarring moments; no awkward set transitions. It runs like clockwork, flawlessly, as a top-notch musical should.

By the end of the show, it is guaranteed that the audience will be dancing in their seats. It’s hard not to.

I had a wonderful night watching Jersey Boys and it really did live up to its reputation. This is one hell of a show, and it dazzles with talent, wit, and sincerity; an insight into stardom, the story of the rise to fame, and a nostalgic trip down memory lane.

You could almost say it’s just too good to be true; it’s easy to see why, much like the original Four Seasons, this show has been such a success.

Oh, what a night of excellent theatre and musical magic!

Jersey Boys is at the Mayflower Theatre until 30 March.