When you think of what makes a stellar musical, a cast of puppets probably isn’t the first thing that springs to mind. But for sixteen years, Avenue Q has been delighting (and disturbing!) audiences in a show that my friends have often described as ‘Sesame Street, but for adults’.

They’re not wrong. Avenue Q‘s raunchy reputation precedes it. In the stage world, it would probably be the honest, saucy, and sexually-voracious best friend.

I was so excited to be invited to watch the show at Southampton’s Mayflower Theatre during it’s UK tour. I had heard mixed things from colleagues and fellow theatre lovers, and was keen to make up my own mind about this musical.

Many of us grew up watching puppets on screen who helped us to navigate the world and learn our ABCs. Sooty, The Muppet Show, Basil Brush, and Fraggle Rock taught us about friendships, school, spelling, and getting older. Now that we’re adults, we’re still learning, but there are seemingly no friendly, furry friends to offer advice and amusement.

Except…there are. And they live on Avenue Q! 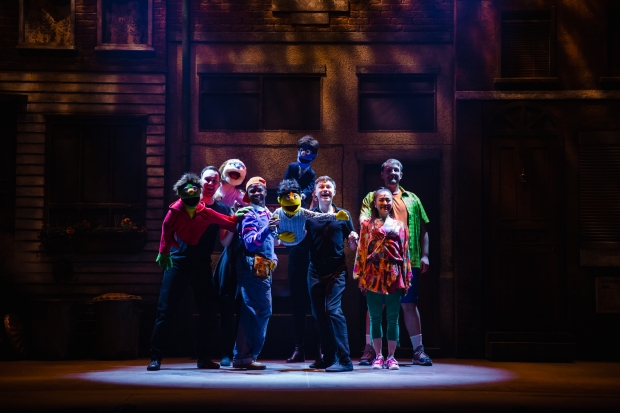 This time, though, the alphabet and times tables have been replaced with finding your purpose, commitment, and one night stands. This show is full of adult life lessons for a more mature audience.

We first meet our lead protagonist, Princeton, as he moves onto Avenue Q as a fresh-faced graduate who dreams of finding his place in life. After being welcomed by the other residents of the street –  bighearted Kate Monster; Brian and his fiery fiance, Christmas Eve; Rod and his roommate, Nicky; and the slightly sleazy Trekkie Monster…not to mention Gary Coleman! – we follow Princeton and his new friends on a journey of self-discovery on the gritty, grimy streets of the city.

Along the way, we watch as relationships bloom and crumble, obstacles appear, and brave steps are taken by all. Big issues are tackled through song and dance, sexual preferences and heartbreak explored via humour, and touching moments are combined with…slightly more literal touching moments.

Avenue Q packs a punch with a seriously talented cast. Since many of the actors are performing with puppets, they are essentially working twice as hard! Cecily Redman as Kate Monster/Lucy the Slut wows with her effortless performance. She combines an incredible voice that comes so naturally to her with wonderfully sassy acting, and is a real pleasure to watch. Despite already being on stage for a large portion of the show, I wanted to see even more of her!

Lawrence Smith’s performance as both Princeton and Rod is also fantastic; what with Smith and Redman in the lead roles, they make something of a power puppet couple. A big shout-out to Tom Steedon, too; an unexpected delight as the somewhat revolting but (eventually) loveable Trekkie Monster, who could well be a sweetheart underneath his sticky exterior.

The Bad Idea Bears (played by Megan Armstrong and Tom Steedon, again!) are little devils wrapped in cuddle-me fur, and Saori Oda’s Christmas Eve and Oliver Stanley’s Brian make a thoroughly entertaining duo-next-door, too. Nicholas Mclean as Gary Coleman is the cherry on this cheeky cake; each and every member of the cast is clearly having the time of their life.

The puppetry itself is very impressive. Often, it’s hard to tell where each actor ends and the puppet begins, and I was mesmerised. This is not a ventriloquism show; the actors behind the colourful characters make no attempt to hide, but their own expressions and movements seamlessly blend with those of their figurines into one fluid and fantastic performance.

On top of this, the staging is fabulous. The mostly static set not only mimics the puppet shows we know and love, but it also offers a solid and consistent platform on which life on Avenue Q can unfold. It’s somewhat simple, but also clever and effective, with hidden doorways offering an insight into the private lives of Princeton and his neighbours, little cartoon interludes, and cleverly-placed windows. It almost has a sitcom-esque feel to it. 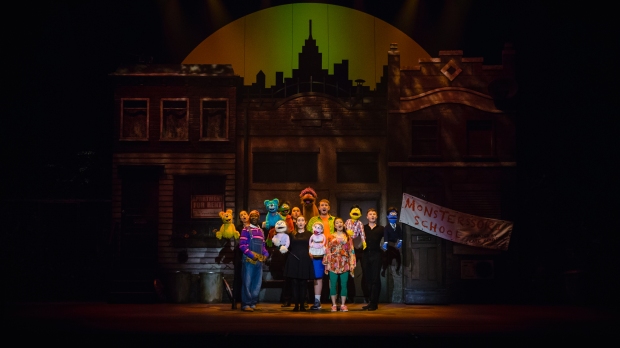 There’s more to this musical than meets the eye. Avenue Q also touches on some really honest and personal topics. I never thought I’d relate so much to a troupe of singing puppets, but they speak and sing so candidly about feeling lost, wanting to find a purpose and being confused or disappointed by adult life. From the moment the opening lines of What Do You Do With A B.A In English? were sung, I knew that I was watching the right show for me.

In between the rude and riotous numbers, there are tunes that tug at your heartstrings. There’s a Fine, Fine Line really strikes a chord, and it’s surprising how such a bawdy show can help you stop and think about your own concerns and choices.

I also really enjoyed how simple the storyline is. This is not a complex musical, and it’s not hard to follow; there are no outlandish plot twists or unbelievable, fairytale moments. Despite the fact that the cast is half made up of brightly-coloured creatures, manipulated by human hand, it’s unexpectedly representative of genuine human experience; just a little larger and louder than life.

Avenue Q is furry, feisty, full-frontal fun. Grab a ticket and gird your loins for a night that is definitely NSFW. It’s uncensored and unmissable; just don’t take your nan (unless she has a wicked sense of humour, too!)

Avenue Q is at Mayflower Theatre, Southampton, until 31 August

Tickets gifted by Mayflower Theatre, but my opinions are all completely honest, unbiased and my own