Now listen up, you revolting lot. There’s a new show in Southampton.

Matilda is a family favourite. Whether you love the book, the film, or both, it’s a timeless story overflowing with all the charm and creativity you’d expect from the mind of Roald Dahl. There’s magic and mischief and…well, you know – I don’t need to tell you!

It makes sense, then, that it’s been translated into a theatrical production. In 2010, the Royal Shakespeare Company’s Matilda The Musical bounded onto the stage. With music and lyrics by the marvelous Tim Minchin, and directed by Matthew Warchus, it has since won multiple awards and has remained a firm fixture in the West End.

My wonderful parents bought me a ticket to see Matilda in London for my birthday at the end of last year. I fell head over heels with the show – so when the Mayflower Theatre gave me the opportunity to review it while it was on its UK tour, I leaped at the chance! 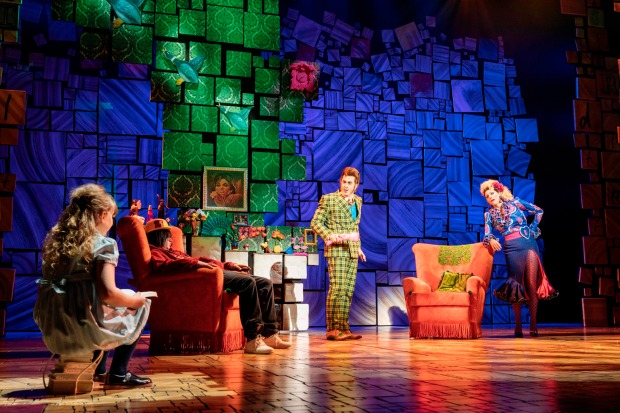 There is a reason why this production has been such a rip-roaring hit. Matilda the Musical is wickedly brilliant. It’s clever and charming and cheeky; it’s the show that sits at the back of the classroom throwing paper airplanes and daydreaming, with dirty knees and twigs in its hair.

It’s the very essence of childhood imagination shaped into songs and thrust upon the stage; it’s carefully curated chaos with a sprinkling of sugar added for good measure.

The cast is guaranteed to blow you away. I am always a little nervous about young performers (see my review of Annie for more on that!) but these kids keep up with the adults and give them a run for their money. Size really doesn’t matter; they have more talent in their little fingernails than I could ever dream of having, belting out songs and careering around the stage with impeccable timing. They are all naturals, and seem to be having a blast while they’re at it.

Then, of course, there’s the star of the show. Freya Scott is superb as Matilda; a pint-sized star with a big voice. She charms us all with her brains and brilliance; to captivate an audience and perform with such skill at such a young age is impressive.

Presley Charman’s Bruce, Chantelle Tonolete’s Lavender and Alfie Sanderson’s Nigel are all fantastic, too; and let’s not forget Amanda Thripp (Darcy Kelly) and her pigtails! All favourite characters from the story, and each one delightful in this show.

It seems unfair not to mention everyone in the cast, as they are all brilliant. Carly Thoms is wonderful as the sweet Miss Honey, and the cartoonish and larger-than-life Mr and Mrs Wormwood (Sebastien Torkia and Rebecca Thornhill, respectively) are delightfully awful. I know you’re meant to thoroughly dislike them, but it’s hard to when they have so many excellent lines and offer a laugh a minute.

There is a special place in my heart for the villain of the story. Elliot Harper as Miss Trunchbull is terrifically tyrannical and, if it weren’t for such a wonderful Matilda, would probably steal the show. Not only do we see the evil character we know and love from the film (Pam Ferris set the bar high!) but Harper’s Agatha also has a hint of insecurity about her which makes her a little more human and even more amusing. Trunchbull really is one of the show’s highlights.

A musical is only really as good as its music! Tim Minchin’s lyrics and tunes are incredibly clever and full of joy and exuberance. No ballad was boring, no tune is too much. I particularly loved The School Song and Revolting Children – in a world where musicals are popping up left, right and centre, it’s a testament to the writing that each piece feels fresh, witty and unique.

The magic of the story extends to the staging, too; there are tricks all over the place, with hidden treasures adding so many layers to the show, just like Bruce’s chocolate cake. The design is such a treat and gives this much-loved story the platform it deserves. It looks just like a storybook has come alive; which is exactly what you’d hope for.

Matilda The Musical is deserving of every accolade it’s been awarded. Thankfully, the creative crew have taken a well-loved tale and transformed it into something that pays homage to the original story while adding extra elements of surprise.

This is an adaptation where nothing is lost, only gained. I could watch this show again and again and still be delighted by Trunchbull’s insults, the Wormwoods’ comical ignorance, and Matilda’s small acts of rebellion.

The classic story has come to life, leaping from the page and onto the stage and bringing all the magic of Roald Dahl and Quentin Blake with it, and a few new treats to boot.

Put down your books, maggots. Get out of the library. Stop reading, and worm your way down to the Mayflower Theatre while Matilda‘s in town.