The bank robbery; a classic setting for many a story.

Now it’s Mischief Theatre’s turn to take on this trope, with their Olivier Award-nominated show, The Comedy About a Bank Robbery, which has crash-landed at Southampton’s Mayflower Theatre for just a few days on the last leg of its UK tour.

This rip-roaring scallywag of a show follows on from the success of The Play that Goes Wrong – clearly, these guys are big fans of stating the obvious when it comes to titles! At least we know what to expect.

The Comedy About a Bank Robbery does what it says on the tin – it’s a comedy show involving a bank robbery – but that’s where the simplicity stops. This production is an incredibly clever and witty tonic to the chaos and seriousness of real life at the moment, and an escape from the drudgery filling our newsfeeds.

The show is set in fifties Minneapolis, centering around a rather run-down bank and kicking off with a jailbreak from possibly the world’s worst prison. Everyone’s a crook, and Prince Ludvig’s giant diamond up for grabs. You never know quite who to trust, or what will happen next – and that’s as much as I’m revealing! 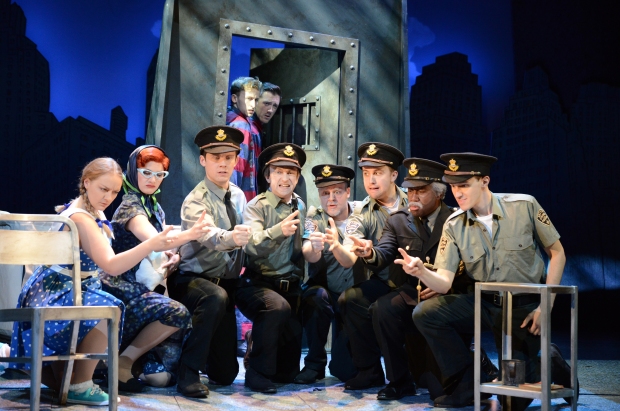 I loved Mischief Theatre’s The Play That Goes Wrong when it came to Southampton in 2017; but now that almost feels like it was a warm-up for this, the main event. Bringing classic slapstick comedy, wit and wordplay back to the stage, The Comedy About a Bank Robbery is a showstoppingly silly celebration of the pure and simple pleasure of laughter.

Of course, such a density of comedy could perhaps overcompensate for a lack of storyline, but there is no risk of that here; the plot is as strong as the jokes, and there is absolutely no chance of getting bored or confused when you’re watching this show. It’s full to the brim with both style and substance. 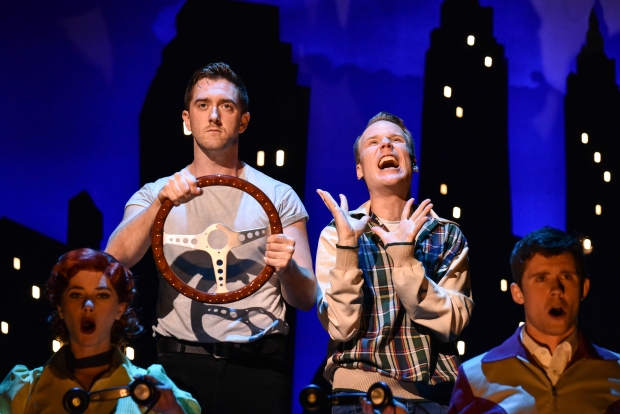 Despite its strong storyline, I am convinced this show wouldn’t be half as funny if it wasn’t for the cracking talent and timing of the entire cast. Unbelievably, some of the team are still new to the stage, which makes it all the more impressive. This show is Julia Frith’s debut; she plays the alluring bombshell, Caprice Freeboys, with ease, excellent timing, and some remarkable vocals.

Jon Trenchard’s hapless Warren Slax is the butt of all jokes, the unluckiest man alive, and the eternal victim…and yet, he is still utterly loveable and continually steals the show.

George Hannigan plays Everyone Else (yes, literally!) so, so well and his physical comedy skills are a delight. Another highlight is Seán Carey’s Sam Monaghan, the pretty criminal caught up in his biggest scrape yet, who is the perfect loveable rogue.

Everyone gracing the stage in this show is exceptional, working together seamlessly to produce something fabulous; the whole cast is a force of funny to be reckoned with.

Throughout the performance, entertainment comes from the simplest forms to the elaborate; from repeatedly hitting people over the head to a heist even Tom Cruise would admire. They even ‘defy gravity’ at one point in an impressive use of staging! After a static (albeit still clever) set for The Play that Goes Wrong, this mutating, beautiful stage is a treasure trove of tricks and trap doors.

It’s all in the little details, too; in the ravenous seagulls, the frantic charades, and the ever-growing moustaches of the American police force. There is so much to watch, to enjoy and to laugh at, it’s hard to keep up, and you could definitely see this production again and again without getting bored.

The Comedy about a Bank Robbery is sure to become a classic. It combines old-school slapstick and farcical comedy with stunning staging and an incredible cast for an all-around uproarious night at the theatre.

When (not if!) you get tickets for this production, it’s not only Prince Ludvig’s diamond you’ll need to keep an eye on; the cast stole the entire show, the air from my lungs, and my heart – but I think I’ll let them get away with it.

The Comedy about a Bank Robbery is on at Mayflower Theatre until Saturday 6th April.

5 thoughts on “Theatre Review | The Comedy About A Bank Robbery”