Forget about the imminent advent of RuPaul into the UK; the drag queen I’m pledging allegiance to right now is Lola (and her band of Angels, of course) from Kinky Boots.

The award-winning stage sensation has sashayed into Southampton for just over a week of its UK tour, and I was lucky enough to go along to the Press Night at the Mayflower to see if the show lived up to the glittering reviews from friends and internet folk.

If, like me, you’ve heard of the musical, but know nothing of the plotline, here’s a sneak peek into what to expect.

Kinky Boots tells the story of Charlie Price who, despite his determination to leave his hometown behind for a shiny new life in London, ends up inheriting Price & Sons – his father’s shoe factory. When the business faces failure, Charlie finds a solution in an unlikely encounter with Lola, a drag queen who flips his life upside down and teaches him and the people of Northampton a lesson or two along the runway. It’s based on a true story and touches on so many real-life issues – but more on that in a bit.

Let’s focus on the company first. Of course, the star of the show is the sensational Lola, played by the uber-talented Kayi Ushe. Lola is what every drag queen should be; flashy, flirtatious and fabulous. Ushe’s voice and stage presence ensure that all eyes are on him, though the incredible costumes are enough to do that on their own! The way that Lola’s character moves seamlessly from confidently dishing out inspirational quotes, to revealing her vulnerabilities and inner conflicts, is so well executed and, most of all, moving. She is vulnerable and vivacious all at once.

Joel Harper-Jackson’s Charlie is a loveable everyman who, as every good protagonist should, learns from his mistakes and goes on a journey of self-discovery. His on-stage relationship with Ushe/Lola is striking and in particular their duet ‘Not My father’s Son’ captures hearts throughout the auditorium. Demitri Lampra’s Don plays a crucial part in the story and is comic relief and social commentary rolled into one soft-centered bloke. Lola’s troupe of Angels are also, of course, great fun to watch, and Paula Lane as the loveable Lauren is hilariously down-to-earth, relatable, and the perfect Girl Next Door.

This is a show with true heart and soul, sass and sparkle; it is a story of acceptance, loss, and bravery. It lightly explores the complexities of drag, sexuality, and gender, and addresses bigotry, intolerance, and closemindedness without lecturing or disengaging the audience, trimming its social commentary with diamantes and fringing.

Among many other things, Kinky Boots is also a wonderfully touching window into loss and grief, with the two core characters both mourning the absence of their fathers; one in death, and the other in estrangement.

Although I haven’t watched the film (or read the book…oops!) the stage show brings that familiar British Film-feel into the theatre. In fact, it reminds me very much of the likes of Pride (in which London-based gay and lesbian activists join Welsh miners in their strikes in the 1980s) and even The Full Monty (where cash-strapped northerners adopt the art of stripping to make ends meet). Each of these stories explores different communities coming together and accepting peoples’ differences, fighting for a cause, or going out of their comfort zones to seek success; it’s exactly this realistic and purely human story that wins over hearts in the all-singing, all-dancing, all-strutting extravaganza that is Kinky Boots.

The choreography (Darren Carnall and Jerry Mitchell) in this show is supreme. From the precise and all-out drag show dancing to the impressive boot/treadmill routine (which had echoes of *that* OK Go music video) this cast really can move – even in six-inch heels!

As with any musical, the actual music is an important factor. I am not sure that I was blown away by the songs themselves, as wonderfully as they were performed. To me, this show is all about the story, the spectacle and the talent of the cast.

Overall, the music, though enjoyable, is not as catchy as I usually expect from a smash-hit show. I couldn’t sing any of the songs to you if you asked me to, which I can usually do after seeing a performance I enjoy. This is a little disappointing (especially as the music was written by Cyndi Lauper!) but I don’t believe it has detracted from my love of the show.

Some productions are stronger in their songs and have less of a focus on the plot; for Kinky Boots, I think the opposite is true, reflecting its adaptation from book, to film, to stage. 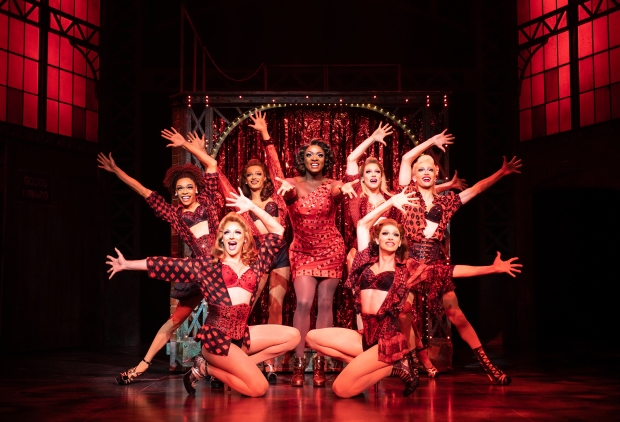 It says everything that the final number gets the audience up on their feet clapping and dancing along with pure joy. This really is a production that puts people at the heart; not just of the story, but of the performance and the entire experience.

The Kinky Boots spirit spills out from the story and the stage into the seats, eventually making its way out of the doors and onto the street once the curtain has fallen. There is a huge sense of love for this production which clearly means so much to all involved, and it’s a testament to the cast and the storyline itself.

Kinky Boots is a joyously uncomplex exploration and celebration of some pretty complex feelings, emotions, and experiences. It’s not only feel-good, but full of feelings too, and is, ultimately, a celebration of being true to yourself, whatever that means to you!

As the lovely Lola would say: ladies, gentlemen, and those who haven’t made their mind up yet…you are in for one hell of a ride! This is a production with both soul and sole.

Kinky Boots is at the Mayflower until Saturday 14 September.

Tickets gifted by Mayflower Theatre, but my opinions are all completely honest, unbiased and my own