[Press tickets provided in exchange for a review]

Southampton’s Mayflower Theatre asked me to go on a 24-hour solo adventure to preview the world stage premiere of Band of Gold at Nottingham’s Theatre Royal before it arrives in our city in February.

Not only was the whole weekend a fab experience (I feel very lucky!) but fortunately, the production I had been sent to see turned out to be far better than I first anticipated, and the whole trip was a resounding success.

Here’s the resulting review; the tickets and trip were gifted by the Mayflower, but – as always – that in no way influences my thoughts and feelings of the show.

Band of Gold brings Kay Mellor’s award-winning nineties TV series of the same name onto the stage for a new generation. I must sheepishly admit here that I don’t remember the original series, as I was only five years old when it was first screened (sorry!), so I watched the show with absolutely no idea what to expect.

The story, for those of you as clueless as me, follows the lives of a group of sex workers living and working in Bradford. Gina (Sacha Parkinson) is at her wits end trying to make ends meet, give her daughter the best upbringing, avoid her violent nearly-ex husband, and dodge a troubling loan shark. In a desperate bid to make money and take back control, she joins Carol (Emma Osman), Rose (Gaynor Faye) and Anita (Laurie Brett) on The Lane to try and earn fast cash for a fast route to freedom.

It seems to be working out ok for the ladies…until a killer makes a move, and the fallout tips their worlds upside down. No spoilers here – I won’t reveal what happens next – but the show quickly becomes a gripping urban whodunnit, with everyone a suspect and nobody safe.

There are some big names in this production who you perhaps wouldn’t expect to see on stage, including many actors you’re more likely to watch on a soap rather than in a theatre. For example, Kieron Richardson, better known for many as Ste in Hollyoaks, and Shayne Ward, now in Coronation Street and one-time X Factor winner, both land in this category, as do many of the others.

Fortunately for the audience, they all adapt to live performance well, and there isn’t a hint of the Street or the East End about them. In fact, their acting backgrounds seem to have trained them all well for a dramatic and down-to-earth production like this!

Faye is superb as the no-nonsense Rose; while she is delightfully tough, her barriers are broken down and we are privy to her private memories and experiences. Osman also stands out as Carol, portraying the character’s mental health struggles and motherly nature with such skill that your heart goes out to her while, at the same time, she earns a smile. Parkinson’s Gina is sweet and vulnerable, while Brett is the ultimate glamorous matriarch. The ladies form a powerful quartet.

The men in this show are all troubling for different reasons. Richardson is a surprise as Gina’s abusive, nasty husband Steve; he is sinister and manages to make hairs stand on end. Mark Sheals is intimidating as George, Joe Mallalieu’s Mr Moore is magnificently sleazy, and Ward’s Inspector Newall is every inch the earnest and cooly caring cop.

There are certainly some gender narratives in this production that could be explored further if you had the time (and if I had the word count!).

The story itself covers some gritty topics, too. It’s open and honest about the challenges and risks faced by sex workers; the issues surrounding safety, security, and income. Band of Gold does a stunning job at highlighting and humanising the ladies behind the labels.

It also explores motherhood; one mother’s loss, another mother’s worry, and a woman who never became a mother. Domestic abuse is a key component too, and some of the scenes which revolve around this are shockingly realistic and unnerving. 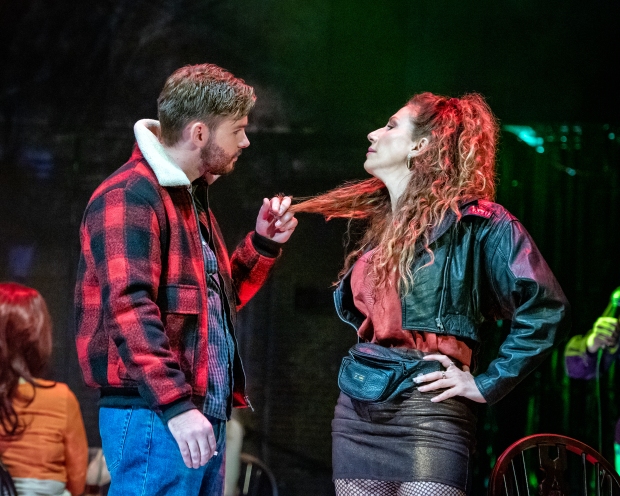 What’s wonderful about this production is its dark humour. Despite the somewhat difficult, raw and confrontational subject matter, there are real moments of comedy. Some of this is pure ridiculousness, and some of it involves jokes made about very serious subjects that have the audience chuckling a little nervously.

You might argue that its balance of humour and sadness reflects the realities of life; it’s this element of black comedy that makes the show so entertaining and thought-provoking.

There are some rather out-there moments too. Watch out for an unexpected encounter involving rubber gloves; it will have you cringing, turning crimson and crying with laughter. This is a production not for the easily offended.

The dark and brooding set (designed by Janet Bird) is incredibly simple, with just a number of translucent panels that slide across the stage in certain ways to form street corners, pubs, and bedrooms. It’s very effective, and even a little beautiful, and gives the stage a slightly grubby look that emphasises the down-to-earth, everyman, urban nature of the play.

Band of Gold is as determined and tenacious as the women whose stories it tells. It discusses some pretty serious subjects with an unexpected lightness which makes it a genuine pleasure to watch, while simultaneously making you think, and perhaps consider another side to the ongoing debate about sex work in the UK and beyond.

This is a 24-carat production, bringing the sort of drama and dark humour usually seen on the TV screen into theatres around the UK.

Band of Gold is on its UK tour and is at Southampton’s Mayflower Theatre from 4-8 February 2020.