Yes, they’re back. After a couple of months off, I’m kicking off this year’s batch of Monthly Muses posts, and there’s a fair bit to catch up on!

The photo I’ve chosen for this post just about sums up the January we had (and not just the weather!). It was a long, long few weeks, and very soggy, but I feel grateful that I mostly managed to fight off the terrible blues that often plague me at this time of year – and as you can see, I kept very busy!

I couldn’t include everything I loved in January, but hopefully, there are some things in here that you might enjoy too – as always! 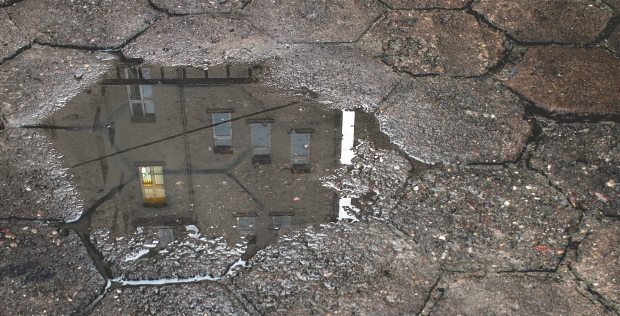 This episode broke my heart. Russell speaks so candidly about love and loss as well as his career and overcoming obstacles (like getting turned down by the BBC at a young age – twice!). It’s a beautiful episode, and I highly recommend you download it for tomorrow’s commute.

I remember seeing Michael Kiwanuka perform at a gig in Hyde Park back in 2011 (I think) and I’ve had a recent resurgence of love for his music thanks to his latest self-titled album, which I have been playing pretty much on loop throughout the last month.

The lovely chaps at the Mayflower Theatre sent me up to Nottingham to preview the stage adaptation of Band of Gold. It was a brilliant trip in itself, and the show was fantastic (and, I’ll admit, much better than I expected!). You can read my review to find out more.

While I was in Nottingham, I made it my mission to enjoy as much local ‘stuff’ as possible. One of these things was Made in Nottingham – a gorgeous shop stuffed full of local, indie goodness; think Etsy on the high street. In true Jo style, I spent forever browsing the stock and wanting to buy it all, before only allowing myself a couple of small treats.

I really wish I’d picked up more; I loved the initiative and wish every city could have a space like this (and for it to thrive!)

Before the Coffee Gets Cold by Toshikazu Kawaguchi

This book was a Christmas present from my lovely friend Lou, and it wasn’t one I’d heard of before, so I was excited to try something a little different!

It’s fairly short and has a really unusual voice, as it’s a translation from Japanese text. I devoured it in one weekend and loved it; it’s soft and slow, and thoughtful too.

I went back to Bristol for the first time in almost five years in January, and ended up having what was possibly the best roast dinner I’ve ever had at the Hen & Chicken.

It was huge, rich, moreish and delicious, and I am already wondering when I can go back for my second serving. If you’re in the city, I would highly recommend.

My fourth book of January – and 2020! – was the much-adored Daisy Jones & The Six, which has had unrelenting rave reviews whenever it’s been mentioned on my social media feeds.

I caved to the hype, picked it up, and devoured it in under a week. It’s unlike any book I’ve ever read in its style, and incredibly cool in its content. You’d be forgiven to thinking it was anything but fiction.

After this, and Evelyn Hugo, I’ve added the rest of Reid’s books straight onto my TBR list.

I’m trying to keep up with my love of trying new recipes, but with limited free time, it can be tricky. But as soon as I saw this recipe on The Mother Cooker’s Instagram, I knew I’d need to try it!

I’m not intending to go fully vegan (though I do think I might go vegetarian soon!) but it’s so easy to eat good vegan food (and I try to have a vegan meal once or twice a week).

Food like this makes it easy to eat less meat and animal produce, and you don’t even realise you’re doing it. This curry is so rich and moreish, and I know it’s going to become a staple in my recipe routine. Add the ingredients to your next shopping list!

Priscilla, Queen of the Desert [Gifted]

My first show of 2020 was an absolute riot. I’ve been intrigued by Priscilla, Queen of the Desert for a while and, not knowing the story, I went in expecting fabulousness and flamboyance. I wasn’t let down; it was great fun and a fab start to the year!

Read my review of Priscilla, Queen of the Desert

Just a quick mention too for the NST Youth Theatre’s production of Twelfth Night – I went to see the show three times thanks to a few technical difficulties, but it was worth the wait.

I’m a big advocate for supporting smaller shows and creatives in the theatre world as well as the bigger productions – after all, everything and everyone starts somewhere!

Read my review of Twelfth Night.

Everything I wrote in January 2020