[Press tickets provided in exchange for a review]

I’m a sucker for a quirky adaptation of William Shakespeare’s work. In the past, I’ve seen The Tempest set in Africa, a fantastical update of A Midsummer Night’s Dream, and a dystopian Macbeth.

A karaoke-infused Twelfth Night, then, sounded like an exciting twist on a much-loved classic, and I was intrigued to see how it would come together (and whether it would be a soundtrack so good, it would have ruffled Bill’s ruff.)

If you’re not already familiar with the plot of Twelfth Night…well, it’s a classic Shakespearean comedy that centres around disguise and mistaken identity, as well as unrequited love and a dash of drama (of course!). There’s cross-dressing, a love triangle, and forged letters. What more could you want?

Adapted and directed by Liam Gifford, assisted by Rosie Peters, and produced by Holly Mitchell, this version of Twelfth Night is NST Youth Theatre‘s latest production; and while the script is all Shakespeare’s, this is well and truly a modern-day rom-com. 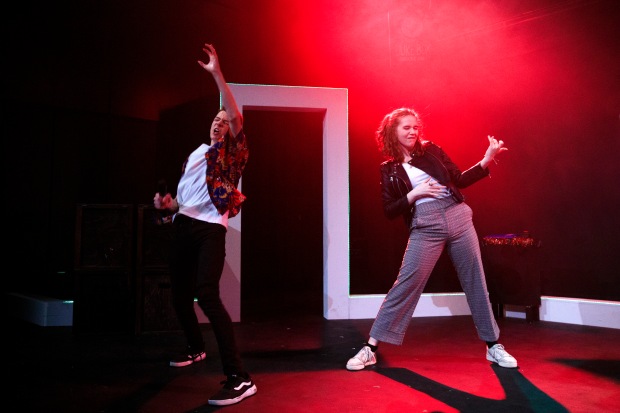 It may be a youth theatre production, but there is a level of real maturity to this show. The cast clearly possesses both budding talent and enthusiasm which really draws you in.

This performance of Twelfth Night is about as far away from the wooden readings of Shakespearean drama which are oh-so common in schools; this is how you get young people to fall in love with the work of the Bard.

The karaoke element is huge fun and a great addition. Watching characters express themselves through well-known, much-loved (and often cheesy) songs adds another layer of meaning to the story, while also making Shakespeare accessible and easy to follow, and highlighting the timelessness of the tale.

The NST Youth Theatre team have not had it easy with this production, thanks to a run of bad luck. Sam Benham performed his Sir Toby with such vigour on the first night that he dislocated his knee just 30 minutes in, prompting a cancelled show. The final night was, unfortunately, also cancelled due to unforeseen circumstances.

Luckily, we were treated to an extra performance later in the week, and the young cast members seem to have taken these challenges in their stride and thrown themselves in, coping with, again, a great deal of professionalism and maturity. 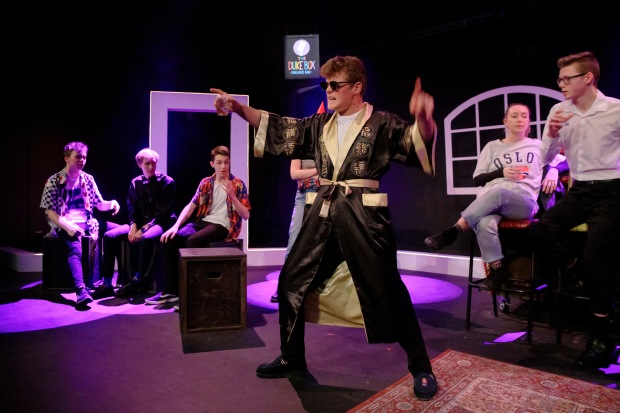 Despite his aforementioned brief appearance on stage, Benham’s performance really stood out and it was a shame to have had our time with him cut short. I hope his mishap doesn’t put him off throwing himself back onto the stage (though maybe not quite so literally!)

It’s important to note that the creative team behind the show are all members of the Youth Theatre – and all female, too. Jessica Rowlands and Rebecca Legg (design) and Caitlin Maxfield and Lisa Viel-Vigneron (lighting) have done a sterling job and it’s a great-looking show.

The staging gives plenty of space for excessive movement, big solo numbers, and plenty of imagination, while putting the audience in the middle of the action – right there in the bar with the characters. A hanging window frame sits between two doors, and we can see cast members moving between the venues; and with the action split between two well-named rival bars, a quick switch in lighting shifts the audience’s focus.

It’s all deceptively simple but effective, and you can see that a lot of thought has gone into it all.  The costumes also really highlight each of the characters’ individual personalities and are an important part of making this story truly contemporary. 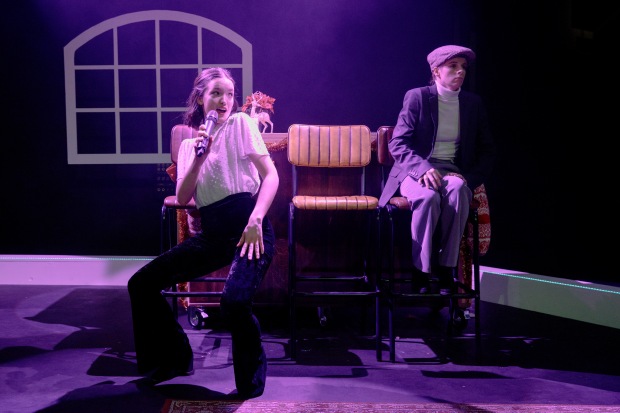 As with any good production, it’s very hard to single out any one performer; this Twelfth Night is so clearly a team effort and the young actors all encourage and inspire each other along the way.

Rosie Pike’s clownish Feste is cool and creative, offering witty anecdotes to keep the story going. Pike also arranged her own music to be performed with Shakespeare’s words; another example of how the show plays up to the young actors’ strengths and offers opportunities to showcase their talents and strengths.

Sophie Andrews is great as Olivia; her glee at falling in love with Viola/Cesario (well-played by Fleur Moore) is exactly how we all feel upon meeting that special someone.

Kaia Doig’s Malvolia comes into her own as the show progresses, and she is fabulous at the peak of her supposed insanity.

Since the team are so supportive of each other, everyone has their moment on stage.

NST Youth Theatre’s Twelfth Night was well worth waiting for. With an exciting and entertaining approach to telling this much-loved story, and a creative team and cast who are young and ambitious, it will be wonderful to see what more they’ll achieve after a few more years of hard work.

The potential in this cast and team is great, and it highlights the importance of opportunities like this for young people within local communities.

If music be the food of love…well, NST Youth Theatre, play on – and on, and on!

NST Youth Theatre’s next production will be Witches Can’t Be Burned on 26-27 March 2020.