Would you expect the opening scene of an opera to feature an enormous, monstrous lobster?

Neither would I; but my latest trip to the theatre proved that there’s a first time for everything!

The Welsh National Opera (WNO) is back in Southampton at The Mayflower Theatre for their Spring 2019 season, and I was invited along to see Mozart’s The Magic Flute; my third ever experience of opera!

I’ve spoken before about how opera can be far from stuffy and dull. Don Giovanni was saucy and dramatic, while La Traviata was sumptuous and sorrowful. The Magic Flute was something else entirely!

WNO’s Spring season is focused on the monarchy, and there is certainly opera royalty present in this production!

The story of The Magic Flute (first performed in 1791) focuses on a prince, Tamino, who is asked by The Queen of Night to rescue her beautiful daughter, Pamina, from the clutches of high priest Sarastro.

Tamino is joined by Papageno on his quest, who provides much comic relief and is in search of true love of his own. However, upon finding Pamina, the pair decide they would like to stay with Sarastro’s brotherhood, and so the challenges begin.

This production was very different from the previous operas I’ve seen for a few reasons. Firstly, this was sung entirely in English (though still with helpful surtitles!) which made it that little bit easier to follow.

Secondly, it was slightly more colloquial; the sarcasm and jokes had a slightly more up-to-date feel and used our everyday language and humour, making it more relatable and even funnier.

Finally, it had a thoroughly modern-day design. The set was a minimalistic room with a number of doors that occasionally extended to lead to an impressive corridor. The outfits combined bright and modern suits with flamboyant but stylish dresses and tuxedos. Gone were the rich maroons and deep blacks I’ve seen in previous shows, replaced with fluorescent oranges, pale blues, and vibrant greens. There were no bustles or fans to be seen!

I loved the maze-like set; the clever use of perspective and depth, and the playground of removable trapdoors. It was a blank slate to play with, and the perfect canvas for the imagination to run riot on.

And that’s exactly the point; this whole production is a fairytale, a bedtime story, a fable. The Magic Flute isn’t a clever metaphor; there really is a magic flute…not to mention magic bells, giant rhinos and lions, an enormous lobster and a flying fish-shaped bicycle. Yes, really.

The whole show has a dream-like quality which matches the fantastical plot line. It’s like something from Fantasia. If this production was a painting, it would be Magritte’s The Son of Man (but with more orange). 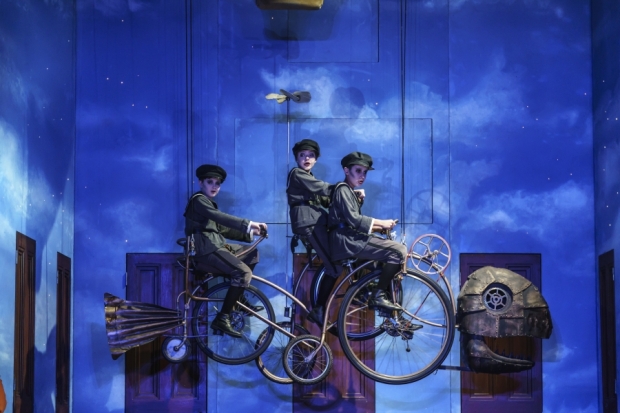 This whole circus-like quality to the opera made it even more captivating and enjoyable; it didn’t take itself seriously at all and showed a wonderfully light-hearted side to a theatrical medium usually associated with tragedy, opulence and a time long gone.

The plot may still be slightly archaic at times (don’t focus too hard on the whole ‘woman saved by man’ and ‘man deceived by woman’ storylines!) but otherwise, this production has stood the test of time.

I’ve been impressed with the talent from the WNO before and this evening was no exception. The whole cast was brilliant. Samantha Hay wowed as the Queen of the Night; her performance of the Queen of the Night Aria (you would recognise it, trust me) was spectacular and she had fantastic stage presence. James Platt’s Sarastro was equally as impressive, imposing in stature as well as vocal skills, and commanding the stage as the high priest.

Mark Stone’s Papageno was a real highlight, too. His singing was wonderful, but it was his charm, wit, and clowning around that won me over. He was loveable, relatable and cheeky and was the ideal light relief from the often intense central love story.

Ben Johnson’s Tamino and Anita Watson’s Pamina were every inch the destined lovers, and you really did find yourself rooting for them (though, at one point, I rather wondered if Papageno would sweep Pamina off her feet!). I also loved the three ladies (Jennifer Davis, Kezia Bienek and Emma Carrington) who were slightly mischevious, lusty and scheming. 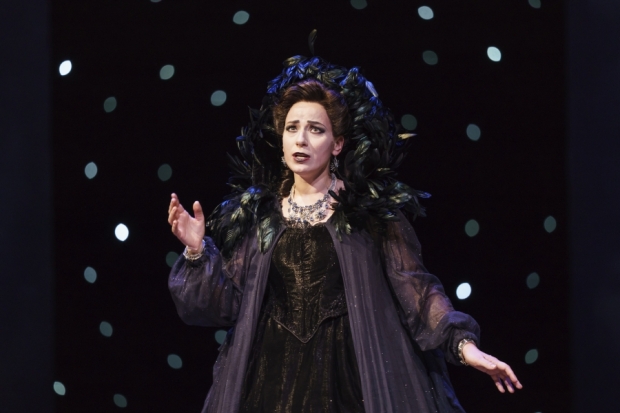 The music, as always, was incredible. There really is nothing like a live orchestra, but listening to the score alone is a lovely experience. I’m no classical music expert, but I recognised some of the pieces, and to my delight, the score was as lively and energetic as the story it was telling.

Out of the three operas I have seen, this is definitely up there as a favourite along side Don Giovanni. In my opinion, if you’re looking for a fun introduction to opera, this would be a great option.

WNO’s The Magic Flute is wonderfully whimsical and a little bit weird; it transports you to a fantastical world full of the unexpected, and will really make you think twice about your preconceptions of opera. This production banishes the idea of this medium as dull and old-fashioned; this is a psychedelic and bizarre interpretation of the classic quest for love. This is true theatre; expect the unexpected.

The Magic Flute is at The Mayflower Theatre, Southampton, until 11 May