When people talk about the opera, it conjures up an image in my mind of an audience dressed in their finest, wielding opera glasses and watching a performance that you could only understand if you were a) extremely cultured or b) spoke Italian. Opera is, for many, an elite experience; a high-end form of theatre that may seem almost intimidating. Until recently, I wasn’t sure I’d ever have the opportunity to go to a performance, let alone enjoy it.

Oh, how wrong I was.

The Welsh National Opera returned in March to Southampton’s Mayflower Theatre for a new season of performances. Over three nights, Southampton played host to Tosca, La Forza Del Destino, and Don Giovanni as part of the WNO’s spring tour.

I was very excited to have the chance to finally experience the opera; having been to the ballet last year, I was keen to open my eyes to the range of theatre out there and to educate myself further. I opted for Mozart’s Don Giovanni; a classic tale of debauchery, seduction, deception, and sin.

Don Giovanni himself may be better known as Don Juan; a fictional libertine and womanizer whose tale is told to warn of the dangers of pursuing pleasure. He is the anti-hero; a charming, bold man who knows what he wants, and goes out to get it, tricking and charming his way into the beds of women; over 2,000 of them, in fact. 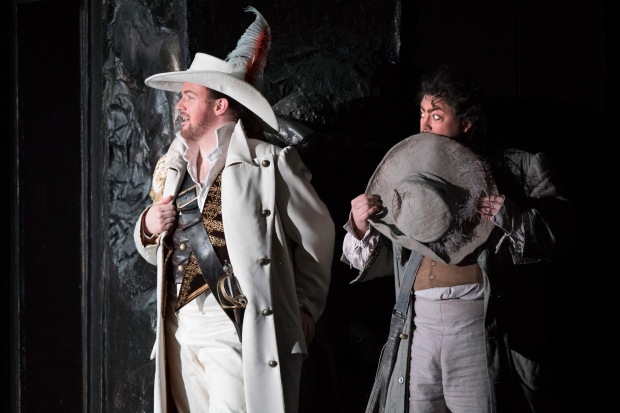 Don Giovanni and his servant, Leporello 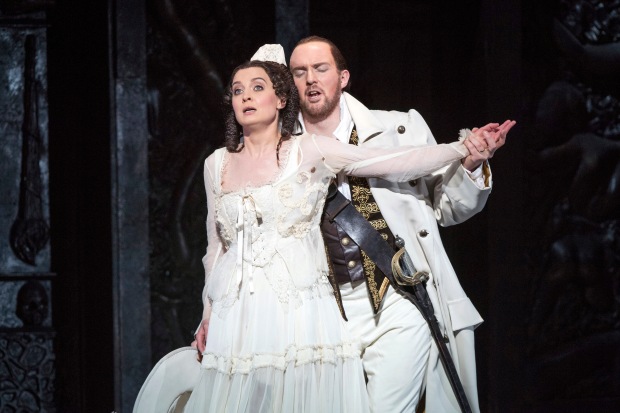 I’m going to split this review into two parts: a proper review of the performance, and a little myth-busting to follow, to prove why you should go to the opera.

I was familiar with the tale of Don Juan, having studied it at university, and was keen to see the story being performed on stage, in Italian, with a live orchestra.

As we took our seats, feeling fancy with our best outfits on (and our plastic cups of wine!) we enjoyed the sound of the orchestra tuning their instruments and warming up. Then, with the rousing opening notes of the overture, we were transported into 18th-century Seville.

The full title of the opera is ‘Il dissoluto punito, ossia il Don Giovanni’ – or ‘The Rake Punished, namely Don Giovanni’. The clue is in the title, and the message, as in many productions of this era, is very clear; if you sin, and live as a rake and a libertine, you will suffer the consequences.

Don Giovanni (a collaboration of the music of Mozart and the Italian libretto – words – by Lorenzo Da Ponte) follows the man in question and his faithful, long-suffering servant, Leporello, in a quest to bed as many women as possible. The opera opens on Don Giovanni’s escape after assaulting Donna Anna; he is caught by her father, and murders him, before escaping. Donna Anna and her betrothed, Don Ottavio, swear revenge. 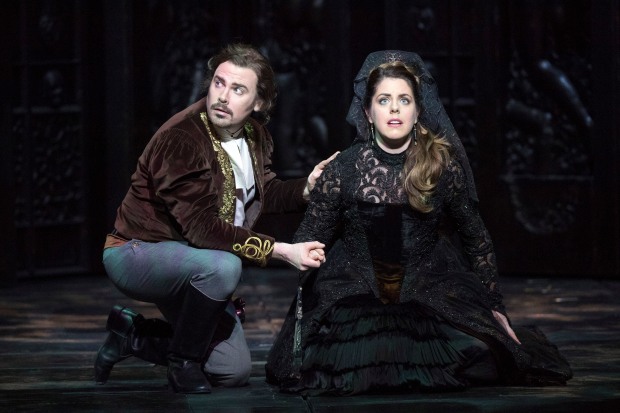 Don Ottavio and Donna Anna swear revenge for her father, the Commentadore’s, death

The rest of the performance – I don’t want to spoil it for you too much! – reveals even more seduction, and scandal. It’s a little complex, but that’s not a bad thing; with so many characters and interwoven storylines, it is even more impressive when it all comes together.

Throughout the opera, Don Giovanni angers a lot of people; his lust for sex and pleasure causes absolute mayhem and leads to poor Leporello almost facing death himself. We are introduced to an old conquest of his, Donna Elvira, a tragic and overly dramatic character, and Zerlina and Masetto, whose wedding day is disrupted by Giovanni’s lust.

It’s no secret that, in the end, Don Giovanni has his comeuppance, and everyone is left to carry on with their lives (and quite literally, as one character sung, go home for dinner!)

The cast was immensely talented, with incredible voices singing non-stop. It’s very hard to single any of them out; however, Gavan Ring made the perfect Don Giovanni – bold, brassy and with fantastic stage presence. It really was difficult to separate the man from the character, and he certainly was the man we all love to hate. Emily Birsan truly stood out as Donna Anna, with a passionate performance of a broken woman. 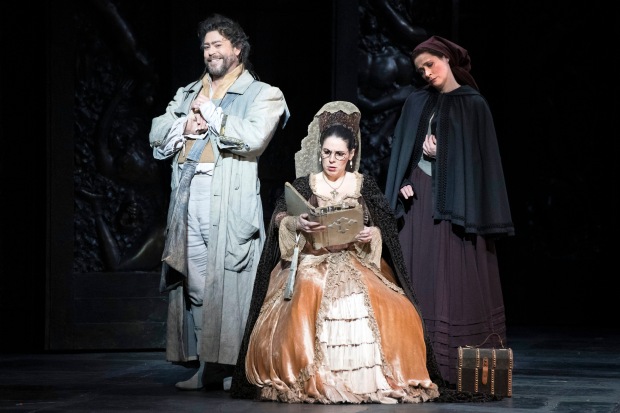 The staging was impressive; lavish and grand, and cleverly designed to fit each scene. The finale of Don Giovanni’s descent into hell was spectacular and a fantastic end to the performance. I was enchanted by the costumes too; opulent, classic and stunning. 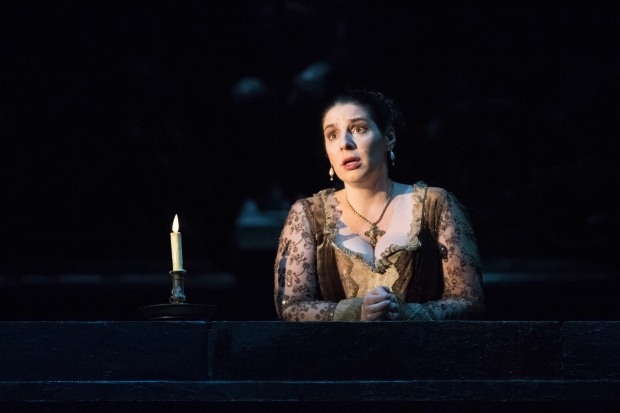 Thanks to my first operatic experience with Don Giovanni, my preconceptions of opera have been completely dispelled. I’m going to just take a moment to bust some myths and prove why you shouldn’t underestimate this classic form of theatre.

You don’t need to know Italian to understand what’s going on. The set included a small screen which displayed surtitles (like subtitles but above the stage) to translate the lyrics, making the story very easy to follow. There’s no need to worry that you won’t follow any of it!

Opera is funny. Yes, that’s right. The lavish costumes and impressive orchestra may give the impression of a stuffy, serious performance, but Don Giovanni was genuinely very funny and had us all chuckling away at times. David Stout provided much amusement as the exploited and weary Leporello, and Donna Elvira, played by Elizabeth Watts, was tragic yet entertaining, despite her heartbreak. However, much of the laughter was provided by my next point…

Opera is saucy. Again, in contrast to the expectations of a formal, respectable cultural experience, the performance was woven with cheeky lines and interactions that left us chuckling and widening our eyes. It should be expected, I suppose, from a story about a sex-driven womanizer like Don Giovanni, but there was nothing subtle about it. I’d like to shout out to the woman in the audience who exclaimed ‘oh my’ at one point; we were all thinking it too. Who knew Mozart was so naughty!?

Opera is far from boring. I think that’s the fear that most people have, and it’s certainly a stereotype, as I mentioned at the beginning of this post. This is absolutely not true. I found Don Giovanni as entertaining and exciting as any musical and play I have seen; the slightly intimidating three-hour performance (I know!) literally flew by; with very few slow moments, and not a single minute of silence. 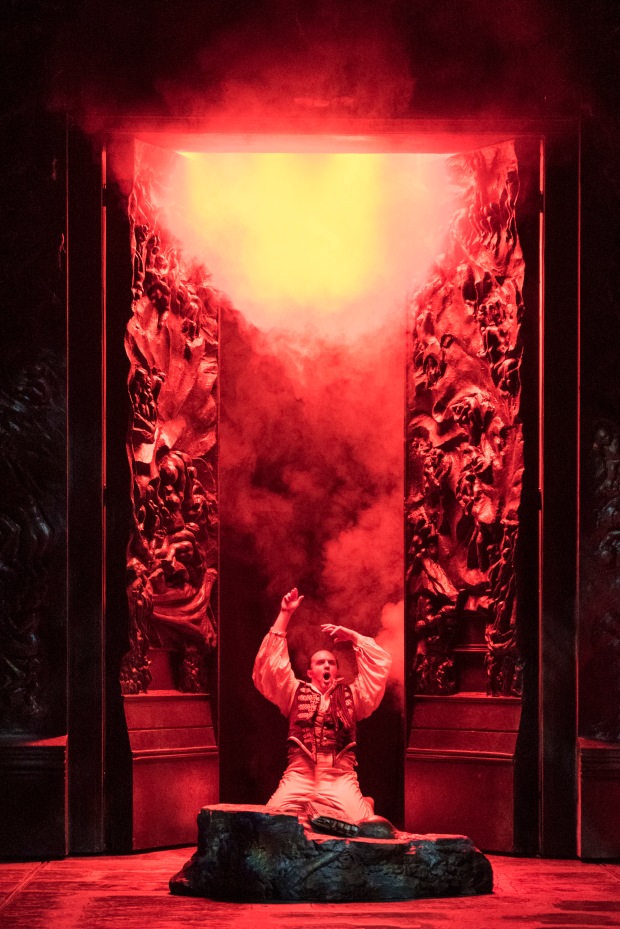 If you have the opportunity to go to the opera, I can’t recommend it enough. It just goes to show that you should never stereotype classical theatre! The Welsh National Opera’s Don Giovanni was a wonderful introduction to a new world of performance for me and I hope it won’t be my last.