It is a special moment, to see the infamous, tragic story of the Titanic retold and commemorated on stage in the very city where it started its first and final fateful voyage.

106 years after the tragedy of the Titanic shook the world, some of the lost souls are brought back to life momentarily on stage, for the UK and Ireland tour of Titanic The Musical, which sets sail from Southampton once more this month at the Mayflower Theatre.

The disaster of the Titanic has been memorialised on screen, stage and in sound for decades, the most famous of course being James Cameron’s epic romantic tragedy from 1997.

This is not, however, the story of Jack and Rose in musical form (which is what, I am sure, many people were expecting!) but something much more honest, and much more ‘real’. 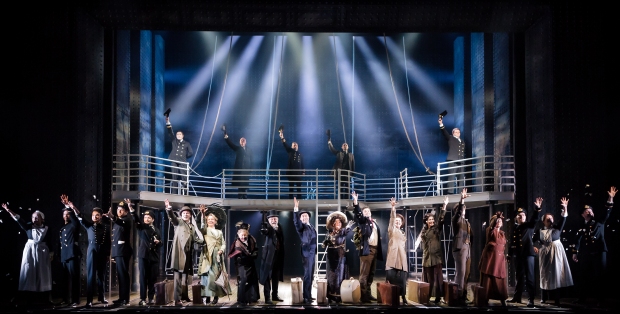 Titanic The Musical draws on real accounts and experiences to re-tell the tale on a personal level. Each character in the show is based upon a real person who sailed on board the ship; we watch as new love blossoms and enduring love withstands all. We see great, ambitious men turn to cowards, and lifelong seamen go down with the ship. We are taken up in the excitement of a new world, and endless possibilities, and the thrill of an exciting life which will never be led.

The show opens, and we are taken on board as the ship embarks on its journey from the ports of Southampton, meeting characters from first, second and third class, and the crew. The first act introduces us to the inner workings of the ship and the minds of the passengers and we watch as relationships and tensions play out and dreams are wished upon.

There’s the upper-class, including the wonderfully charming Mr and Mrs Straus; the middle class – Alice Beane, who is insistent on schmoozing with the elite, and her long-suffering husband Edgar; and third class, where the three Kates from Ireland are driven to start a new life in the new world and escape the hardship of home.

The cast is fantastic, with some impressive singing talent and a real knack for bringing each individual character to life. In particular, Greg Castiglioni as Thomas Andrews, the ship’s designer, was impressive, and Simon Green as J Bruce Ismay had the audience riling up with anger at his selfish arrogance. Victoria Serra as Kate McGowan also stood out as the passionate and sparky Irishwoman keen to turn her life around. As I say, though, each of the actors was extremely talented.

The cast’s voices harmonised beautifully and were incredibly haunting and moving, bringing me to tears a number of times. A range of soft, heartfelt ballads and dramatically powerful numbers cut through the silence in the theatre like ice, vocalising the emotions that became the foundations of the show; fear, loss, sadness, love, and hope.

The performance itself was flawless throughout; flowing as smoothly as the calm sea that surrounded the Titanic before disaster struck. This was helped by the stunning staging, which was simple yet incredibly effective, especially when it came to the climax.

The historical accuracy was superb and attention to detail was clear, proving that the focus of this show is really to commemorate and educate; from the exact number of fruit and veg needed to feed the passengers, to the names used and the cumulative problems that led to such a huge loss of life.

I feel the need to add, too, that this was done sensitively and tastefully; there is not one tacky element to this performance that may render it inappropriate. Conveying such emotion only seems right through the medium of song. In fact, knowing what was inevitably coming meant that, from the very opening numbers, I was fighting back tears. It is eerie, and unusual, to watch famously doomed characters live out their lives on stage.

I found this performance moving and exciting to watch – the standing ovation at the end was enough to prove that this particular Titanic was on course for success at an impressive rate of knots. It is a very special tribute to those who loved and lost that fateful night, allowing the names of many to live on in song and giving them a new lease of life.

Titanic The Musical is on at the Mayflower Theatre until Saturday 21 April. Visit the Mayflower website to buy your tickets, or find out where you can see the performance on the next leg of its tour on the Titanic Musical website.

I was invited to review this performance, but as always all views are honest and completely my own.