Bullish is a playful, fierce and creative exploration and navigation of gender fluidity and identity through the modernisation and adaptation of the Classical myth of the Minotaur.

Produced by Milk Presents, and written by Lucy J Skilbeck, this one-hour adventure invites the audience on a journey that takes us up and out of the labyrinth; but not before some serious searching and obstacles along the way.

Meet Asterion;  one character in four, navigating through stereotypes and over hurdles on a quest of self-discovery and becoming. Using song, spoken word, and powerful performance, the cast whisks us along and up into the frenzy they are going through. 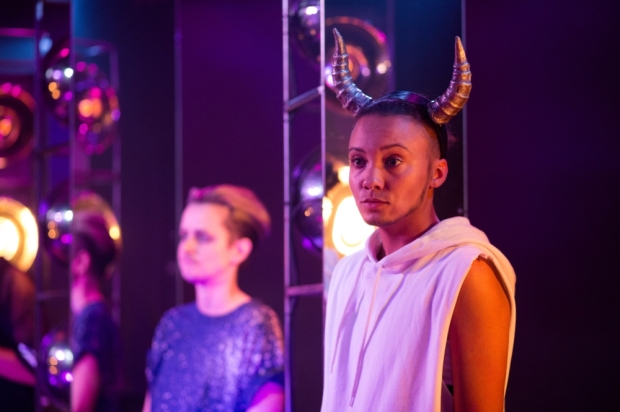 In Greek mythology, the Minotaur – also sometimes known by the name Asterion (yep, the name of the central character) – is half man, half bull, living within the centre of a complex labyrinth. Eventually, he is killed by Theseus.

Of course, as with all myths and legends, it’s really a lot more complex than that; but that’s the general gist of it!

This production combines the images and story of the above myth with realistic, modern-day experiences to explore the issues, questions and complexities – as well as joy and celebration – of non-binary gender navigation. 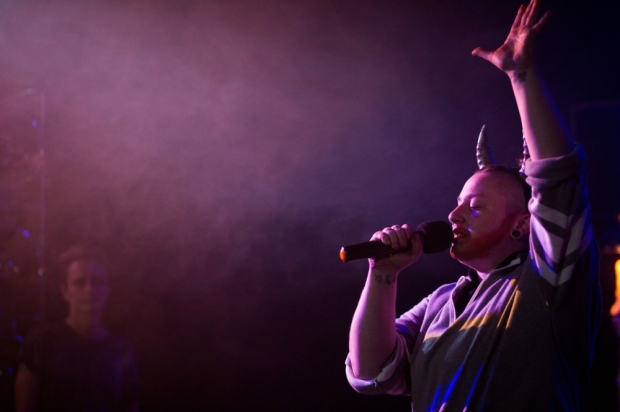 Indeed, the use of the minotaur as a trope is best explained with one of the shows opening lines:

“I am a bull. I am a bull…ish. I live between worlds. Slip between myths with dexterous leaps. Do I scare you? How about now?”

A bull as a symbol of masculinity, a half bull as neither one nor the other; the minotaur as a myth, as opposed to a recognisable animal; defined by people’s perceptions and understanding; uncertainty. A monster to some, just another version of one of us, to others. A creature that risks being hunted down by those who do not understand or accept.

It’s not just the image of the minotaur itself that exists throughout the play. The labyrinth, too, almost doubles as both prison and protection, and Asterion’s relationship with their mother cleverly links up with the myth’s story of Theseus and Ariadne. Theseus, who is a looming figure throughout, eventually appears as the spectre of toxic masculinity; a puffed-up alpha male, whose presence cleverly addresses perception and society’s reception of transgender men or non-binary people.

Much of the symbolism, or the fusion of myth and reality, is open to interpretation, which makes it even more fascinating to watch; every person’s experience is their own.

It’s this creative and clever imagery that weaves throughout the performance, breaking through each scene in subtle ways. Through this, Bullish is able to tackle prominent issues such as communication, society’s understanding (or lack of), support (or lack of) and the problematic concept of the ‘alpha male’, amongst many, many more.

I could go on and talk more about the imagery and detail, but I fear that would spoil the surprise for you if you do go to see Bullish (which you should!) so I won’t go into too much depth. No spoilers here!

The cast is utterly brilliant. Funny, flirtatious, witty, and capable of oozing confidence while portraying true vulnerability. The performers tell a story of transition that, through imagery, highlights the commonalities but also the differences between different experiences; not one gender story is the same, and each is as individual as the person.

Bullish has been produced and performed by a team who all identify as – among others – trans, non-binary and genderqueer, and they have created something that rejects stereotypical trans and gender narratives.

This show sounds like it could be potentially heavy-going, or intense, but it is anything but. Along with its through-provoking moments, it is also joyful and playful, celebrating gender transition while also highlighting its complexities.

Fierce, funny, fiery and fervent, and fusing the ancient and the modern, Bullish is brilliant. It grabs gender definitions and identity by the horns, entertaining and educating, while navigating through a labyrinth of self-discovery and acceptance.

Bullish is showing at Nuffield Southampton Theatres until Friday 21 September, after which it goes on tour around the UK.

I was invited to review this performance, but as always all views are honest and completely my own.