Having never been to the continent, I’d better clarify that I don’t mean that the asian food I eat is always authentic. However, judging by the food I have had, I love the freshness of it, and I love the pure flavour. I recently waxed lyrical about a new thai restaurant in Southampton, and I love a trip to Wagamama. Yaki Soba, anyone?

When I heard about a pop-up called Dumpling Dumpling in WestQuay Southampton and their ‘flavour bombs’, I got in touch via twitter straight away asking if I could pop by and make my own. I saw that a couple of fellow Southampton Bloggers had been creating some and I wanted in. I love learning new skills, trying new things and eating new food. This was right up my street.

A few friendly messages later, I was meeting Nat and her temporary assistant Laura for some DIY dumplings on Chinese New Year (Nat’s partner Dan was sadly AWOL for my visit!). The timing couldn’t have been better and I took along my friend Jane – the biggest asian-food fan ever – to give me a hand! She didn’t need much convincing. 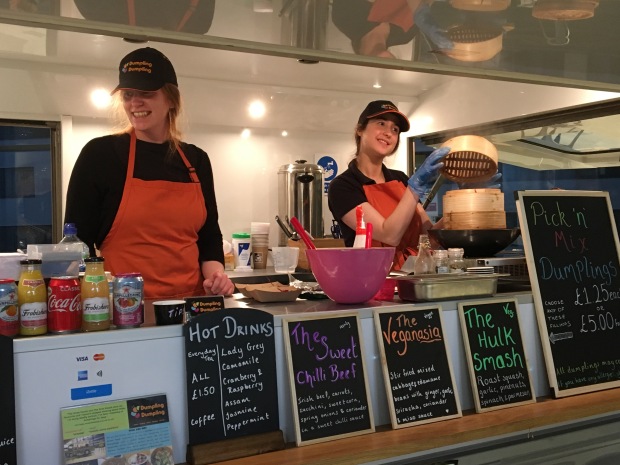 Dumpling Dumpling are currently located in the new WestQuay Watermark with their van, Vinnie, bringing the taste of Asia to the South of the UK. A local company originating from just over the water in Cowes, they’re just starting out and have big, big goals.  Nat explained that her love of dumplings originated from when she was teaching English in China, where she developed the nickname ‘Dumpling’ thanks to an addiction to them! But once she returned home, the UK’s offerings just didn’t cut the mustard, and she decided to take matters into her own hands. And so Dumpling Dumpling was born!

After an introduction to the company and a quick demo from the maestro herself, we settled down to whip up our own. We had two delicious fillings to work with; Chinese pork with water chestnuts, and the new ‘Veganasia’, with cabbage, potatoes and edamame beans. They change their fillings regularly and have sweet options too.

Not content with the simple dumpling style (where you just fold it in half) Jane and I were determined to master the complicated pleat which makes the dumplings look like they’re peeping! Very cute and even more delicious, and I think we did very well for beginners!

It was a really soothing and satisfying experience and surprisingly easy once we got the hang of it.

While we folded and squished, our very own lunch was being prepared! With ten dumplings each ready to be taken home for the next day, we were then served five delicious steamed dumplings of our choice to enjoy there and then.

I opted for Sweet Chilli Beef, Venagasia and Hulk Smash (pine nuts, butternut squash and spinach). Each one was hot, fresh and utterly delicious and I couldn’t get enough. Not normally a meat-eater, the Sweet Chilli Beef dumplings were a winner for me and I honestly could have eaten a tonne of them. 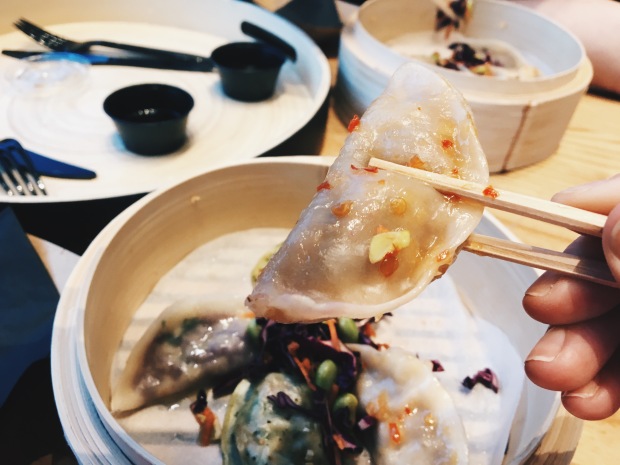 These little gems are definitely are the best dumplings I’ve ever had in the UK.

We left feeling full and happy, laden with our own handmade dumplings and instructions for how to cook them at home. I didn’t even need a fancy steamer – just a frying pan and a lid! Quick, easy, and a great way to have delicious, authentic dumplings at home.

Dumpling Dumpling are only in WestQuay until March 9th, so make sure you grab them while they’re still here! You can stop by just for a bite to eat or even to make your own.

If you’d like to have a go, you can make 15 dumplings each for just £15 – this includes a drink, and one filling. You’ll need to book at least 48 hours in advance too. Get in touch with Nat and Dan at contactus@dumplingdumpling.com or call 07875583397 to book your place!

I had a great time and will be keeping an eye out for them in the future…I have a craving coming on!