What springs to mind when you think of a poetry slam?

Do you imagine a room of politically charged writers, rhythmically spitting out protests or observations on global unjust? Do you think of the beat poets; jazz, berets and abstract imagery you’ll never understand?

Poetry slams aren’t pretentious, or intimidating, or completely inaccessible. They are probably not what you expected at all.

(Ok, some of them might be like the above; I can’t speak for the global slam community!)

But really poetry slams are, to put it simply, a great way to explore the world of poetry and spoken word; to be inspired, meet new people, feel creative, and have fun.

I love a bit of culture. Send me off to a theatrical performance, an open mic night, an art exhibition, or a film event, and I will be in my element. However, I still felt intimidated by the words ‘poetry slam’. It sounded pretty violent to me, and I didn’t fancy being attacked by angry creatives with their sharp-edged words. No, thank you. I avoid confrontation at all costs.

In actual fact, I wish I had gone to a poetry slam sooner.

I went to my first one last week, and I’d like to share my experience, dispel some myths and explain a little more about what goes on, in the hope that you might be inspired to go along to one too if you haven’t already! 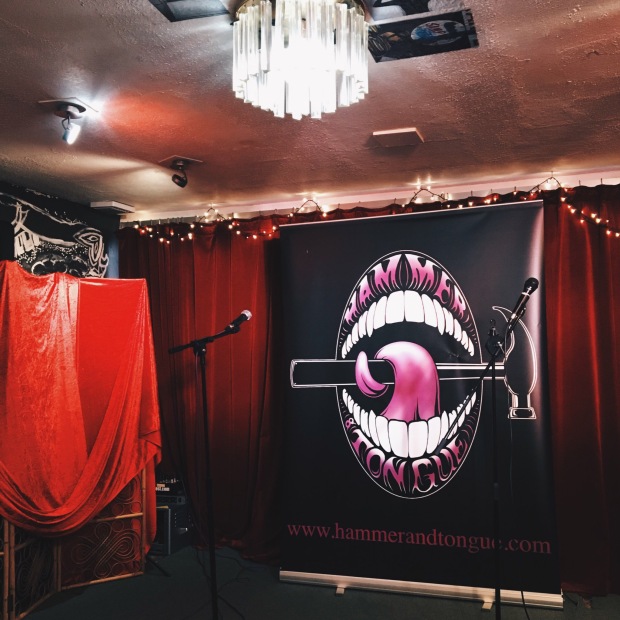 So what is a poetry slam?

A poetry slam is almost like an open-mic night; anyone can sign up to perform on the night. The main difference is that a slam is technically competitive; each poet will be judged, either by a panel or a selection of audience members, out of ten.

Poets have to recite their own original work. They have three minutes, from the very moment they open their mouths (so if you choose to introduce your work, that counts), and points are deducted if you go over (often with a grace period of 10 seconds). Timeliness is key.

When the judges give their scores (to two significant figures; e.g. 6.7, 8.4) the highest and lowest scores are removed, giving a mean or an average of sorts. Judges are required to be consistent and are unaffiliated with any of the performers to make it as fair as possible, and judge the work and the delivery. Sometimes scores are shared with cards; sometimes privately between the panel, and sometimes it’s simply judged by the audience’s reaction.

My first slam experience was at the Hammer & Tongue Solent night at The Art House, Southampton. Hammer & Tongue is a group which hosts events all over the country, bringing spoken word and poetry to major cities including Bristol, Brighton, Cambridge, and Oxford.

This particular series of slams takes place once a month, and each winner goes forward to the regional finals. The winner of each regional final then goes on to perform at the National Slam Finals…at the Royal Albert Hall.

Hence why I did not perform.

This notion is slightly terrifying; not only are you putting your own work out there to literally be judged by other people, but you are also putting yourself forward to potentially perform at one of the most prestigious venues in London.

With a slam that sounds so intimidating, you expect it to be full of semi-professional poets performing work you could never even dream of creating – or if you don’t write, understanding.

You couldn’t be more wrong.

Anyone can do it.

The night was in a cosy, intimate space above The Art House’s main cafe; though there are an official stage area, mics, and an audience, it’s still small enough to feel like someone’s living room. Performing, for someone as amateur as myself, will always be scary; but a smaller space like this makes it a little easier.

The poets who signed up on arrival and who shared their work with us that night varied in skill, age, and experience. There were short, simple poems on counseling, spoken word on a drunken night in Paris, a unique (and slightly too long) piece on fracking and knitting, and a piece inspired by the recent Facebook / Cambridge Analytica furore. The winning poem was a wonderfully powerful ‘coming out’ spoken word piece – it was traditionally what you’d expect from a slam, and so relatable and poignant it completely won over the audience.

Seeing the sheer range of poems and abilities on stage that night made me realise that, yes, I could take part if I wanted to; this isn’t some exclusive club for the next Kate Tempest or Lemn Sissay; this is a safe space to practice your work with an audience on hand for feedback.

It just so happens to be a competition too.

But there was no competitiveness, as such; everyone supported everyone; judges never gave too-low scores out of respect for the courage of all of the poets in sharing their work; there was cheering, clapping, and encouraging responses.

And, on a side note, the hosts were pretty damn brilliant too, taking us through the whole evening with laughter and guidance for us newbies. On this night, in particular, we had two support artists opening and closing the show; Tim Ledwitch was brilliant and tugged at our heartstrings with tales of unrequited love and beloved dogs, and Zena Edwards bought creativity and soulfulness with a true message and closed the evening with a harmonised bang.

You don’t need to be a professional poet to enter a poetry slam.

Poetry slams are simply festivals of spoken word, celebrating the creativity, hard work and bravery of those who want to take part; they are a space to be inspired and motivated, a place to meet new and like-minded people; a place to have fun, relax, try something new, and forget about the burdens of your day.

And if you do want to compete, don’t let your concept of a slam scare you off. If it’s anything like Hammer & Tongue, it’ll be a welcoming, exciting, rewarding, worthwhile experience, whether you win or not.

So what are you waiting for?

The next Hammer and Tongue Solent event is on Wednesday 9th May.

Maybe I’ll see you there!

4 thoughts on “Poetry slams: how they work, and why you should go to one”